skip to main | skip to sidebar

A very wet start to the ride this past Sunday. Our only option was to head north running out of the rain by the time we went past Gravenhurst. Stopped at Tim Horton in Bracebridge before heading north again to the boat ramp at Rosseau. Lunch at Memories on hwy. 69 before coming home around mid afternoon in sunshine. Just three of us on this trip. 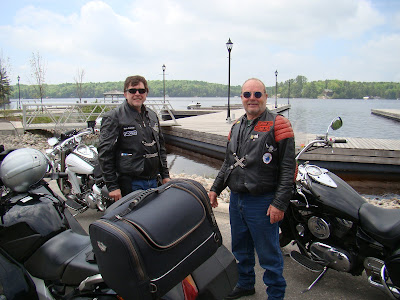 Posted by Ron Hare 1st Officer at 3:49 PM No comments:

Really great attendance from Chapter 523 for the Ride for Dad. Probably around 25 members once we all got together. The ride was very well organized this year with a lunch stop in Creemore and some time to meet old friends from other parts of the Province. 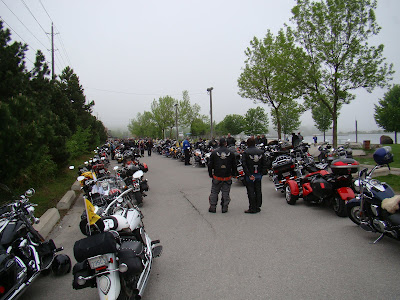 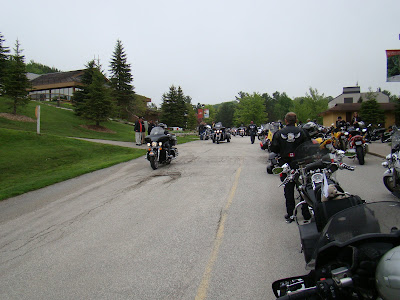 Posted by Ron Hare 1st Officer at 3:43 PM No comments:

The first Coldwater Bike Night was held at Midland Recreation on hwy. 12 in Coldwater. This is the start of a weekly ride-in to be held every Tuesday evening from 6.00 pm until 9.00 pm. Hot dogs are $1 each, pop and water also at $1. Door prizes for the opening night were, one new tire installed, one full face helmet, one tee shirt. A total of $140 was collected for the 50/50 draw won by Tim Fountain who graciously put back most of his winnings to the Charity, Helping Hands Coldwater. Thanks to Keith Leigh for the pictures. 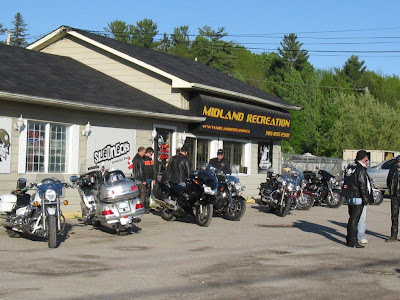 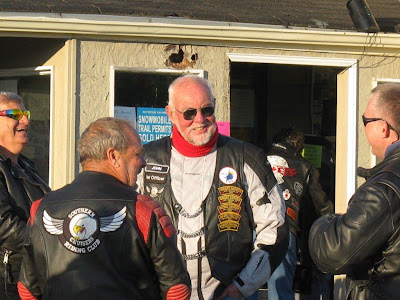 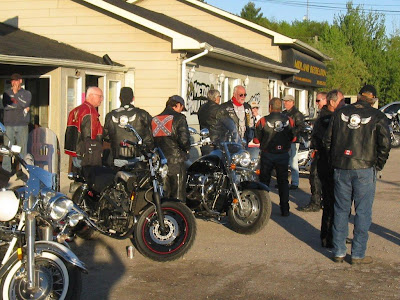 Posted by Ron Hare 1st Officer at 3:38 PM No comments:

Great turnout of 15 members on a day that threatened rain right from the start. Plan A was to head for Thornberry, Plan B was a ride around Lake Simcoe to try and avoid the expected rain. We then opted for Plan C to Gravenhurst via Cooper Falls Road. Thats where the rain started and continued on until after our lunch stop. Once south of Gravenhurst, the roads became dry and the skies finally cleared as we rolled back at Orillia. Thanks to everyone that showed up and thanks to Daphne for the pictures. 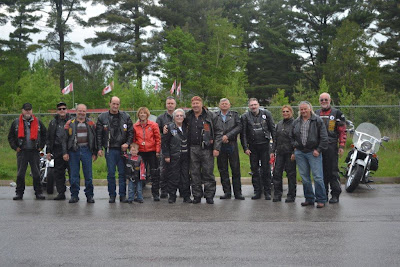 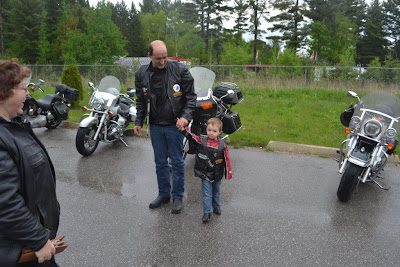 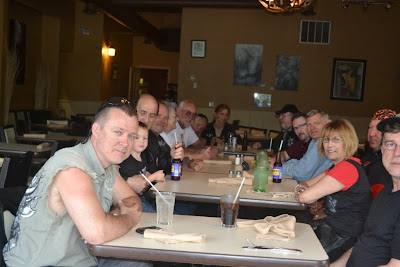 Posted by Ron Hare 1st Officer at 9:47 AM No comments:

Despite the heavy clouds looking like they would dump their load at any time, the Doppler Radar on this Blog showed no rain until quite late at night which is exactly what happened. The result was a comfortable ride to Gravenhurst for their first Bike Night of the season. The attendance was better than I expected along with a live band and the Lions Club BBQ. More pictures by clicking on the "Picture Gallery 2011" 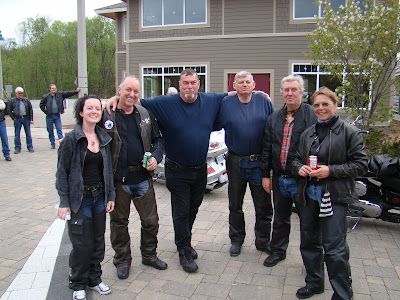 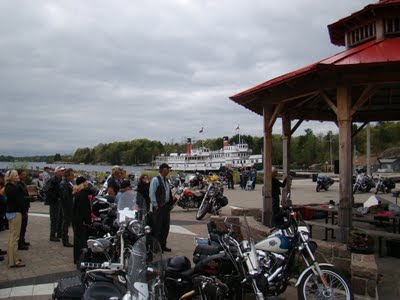 Base Borden Spring Warm Up.

Ten members showed up this morning for the Base Borden Spring Warm Up. By the time we arrived, the course was already set out for anyone to test their slow riding skills, great job to all those that took part. This was followed by the blessing of the bikes and riders by the Base Padre, he made a comment that for all those that had the blessing last year and didn't drop the bike, it must have worked.
Hot dogs were $1 and hambugers $2, and that included a can of pop or bottle of water, what a deal. Jim Wright had organized a trip around the military museum which I personally found very interesting, lots of old trucks, motorcycles, engines, small arms, one CF 5 and much more. All these artifacts in excellent condition. I even found an old tank engine that was made at Tilling Stevens in Maidstone, England. This was the town I lived in during WW11 and later worked in a division of this same company. 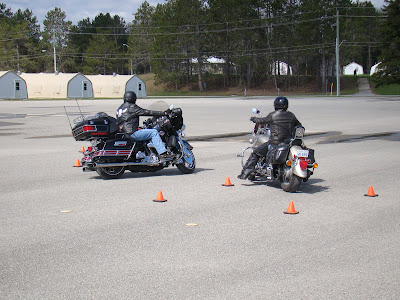 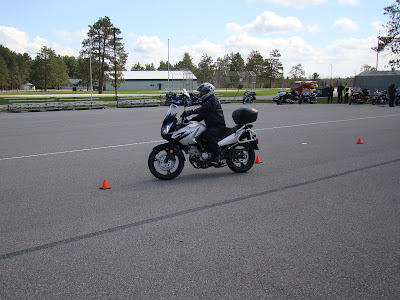 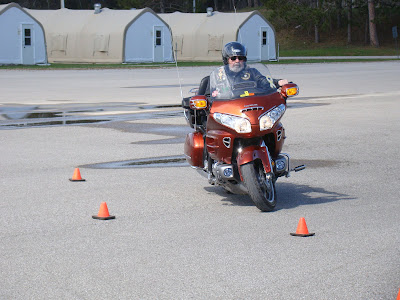 Posted by Ron Hare 1st Officer at 4:32 PM No comments:

The ride to Fenlon Falls last Sunday started out with heavy overcast skies and rather cool temperatures. Despite the weather, nine hardy members turned up to sample the Texas hamburgers at the Falls. The ride home took us through about 15 minutes of moderate to heavy rain before clearing into a mostly sunny afternoon. Great day, great company. Next Saturday is the Base Borden MC Spring Warm Up, don't miss this event. 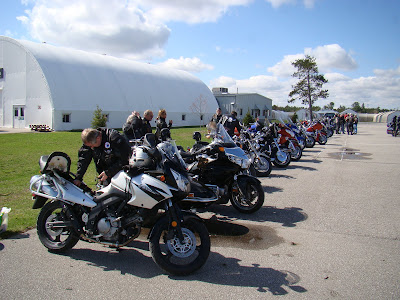 The purpose of this "message board" is to keep members and guests aware of upcoming rides, events and activities, along with a photographic gallery of past events.

You are invited to comment on any of the entries posted by clicking on a "comment" box. Also please browse through the various items of interest such as the Orillia weather, News from the Packet & Times and Friends of Chapter 523.

Shown at the top right of this page is our Orillia Chapter 523 Patch which was designed by 2 nd. Officer Pete Randle in the fall of 2009 shortly after the Chapter was formed.
The City of Orillia is commonly known as the "Twin Lake City" and the "Sun City" both which are depicted on the Patch by showing the sun rising over the Twin Lakes of Couchiching to the north and Simcoe to the south.

Staggered formation with the lead rider in the left tire track, subsequent riders alternating between right and left tire tracks, of the driving lane.

On secondary roads, a one second count will separate each rider, which will be a two second count to the rider immediately in front of you. On major highways where the speed will be increased, this count may be increased accordingly. Riding through towns at slower speeds, ranks will closed up to try and avoid splitting the group up. Traffic lights must be obeyed even if this splits the group.

Riders that require a larger separation than outlined above, for any reason especially for those members riding with a passenger, three wheeled , trikes or sidecar, motorcycle please ride toward the rear of the group but IN FRONT of the designated "Tail Gunner" of the day.

Right and left turns will be indicated by all riders using indicator lights and also hand signals as outlined by the MTO.

Slowing down or coming to a stop will be indicated by a hand signal as outlined by the MTO, this signal will be at the discretion of the Ride Captain.

Additional hand signals initiated by the Ride Captain will be used for riding in single file.

Pointing with the right foot or left hand to indicate an obstruction in the road such as a pot hole, debris or road kill that the rider behind you cannot see. (Pointing with your right or left foot would also be acceptable).

Also use a hand signal to the rider behind you if they have accidently left their blinker light flashing.

Designated Tail Gunners for Chapter .NOBODY WILL RIDE BEHIND THE TAILGUNNER. The tailgunner is the "Eyes" of the group and their primary function is to protect the group as a whole from traffic approaching from behind. This is no small task.

We do have several experienced Ride Captains headed up by Steve Shane. Their duty is to provide us with a safe and enjoyable ride within the limits of the law. It is important for the group to ride at a speed that keeps pace with the general traffic around them.

You may be asked at any time to fill in for either of the above positions and we ask that you respect this request by honoring all of the above.

For Sale or Wanted

Downloading pictures to your computer